State of play at First Playable

Just got back from a nice weekend in London, during which we delivered our “first playable” milestone to Sony.  Actually writing up the blog at the milestone steps as each one is passed sounds like a pretty good way to keep this updated, and it’ll show you the kind of progress that needs made at each step as we go through the development process.

I’ve been adding a lot of the framework upon which the rest of the game will hang, and at this point although there are only a couple of distinct enemy types at the moment there is already in place a few different levels, transitions between those, and the sequence of powerups that’ll eventually lead to warping through to the first Bonus Round.  Quite a lot of ground has been covered in this process, and I’m sure you’ll be pleased enough if I illustrate the progress with a succession of screenshots (click on any screenshot to see a full native rez version).

One of the staple ingredients of TxK is of course the powerup. 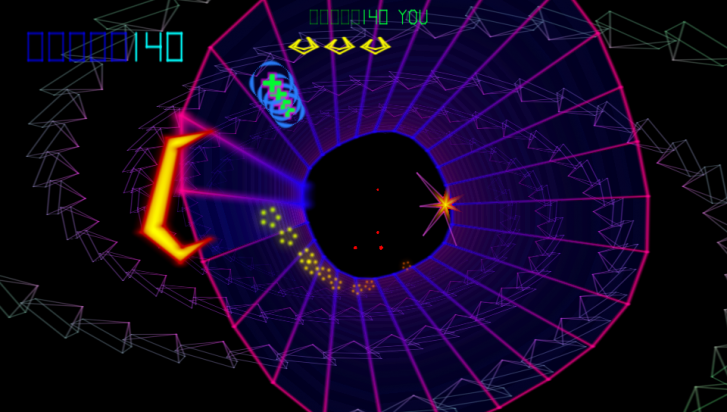 These emerge from shot enemies at a frequency determined by the current difficulty (predictably rather than purely randomly, so you can bank on them arriving when you need them).  Collecting them all without missing any is ideal since it’ll lead you through the complete powerup and bonus chain.  Along the way you’ll see familiar entities such as… 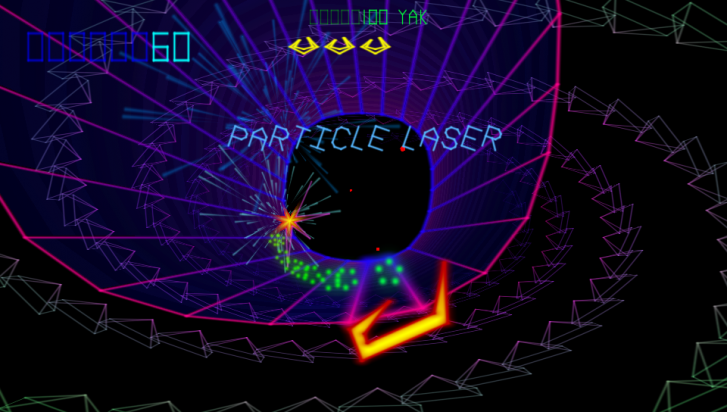 The particle laser, which is a bit more shooty, collidey and penetratey than your regular laser, and deals a bit more damage to anything that might be shielded; and 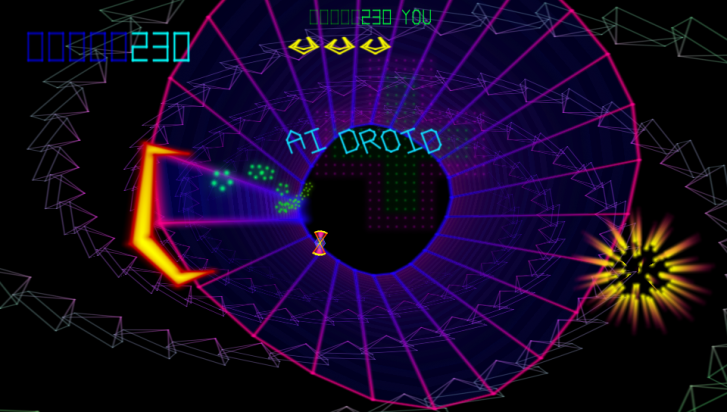 the AI Droid, otherwise known as “your plasma pal who’s fun to be with”. This little fella hovers over the lip of the surface and fires helpful shots down on deserving enemies.  He can’t be killed so it can be useful to delegate to the little chap the shooting of enemies whose line of fire is dangerous to you.

Successfully shoot or evade every enemy on a level and you will be rewarded with a brief but intense spherical explosion. 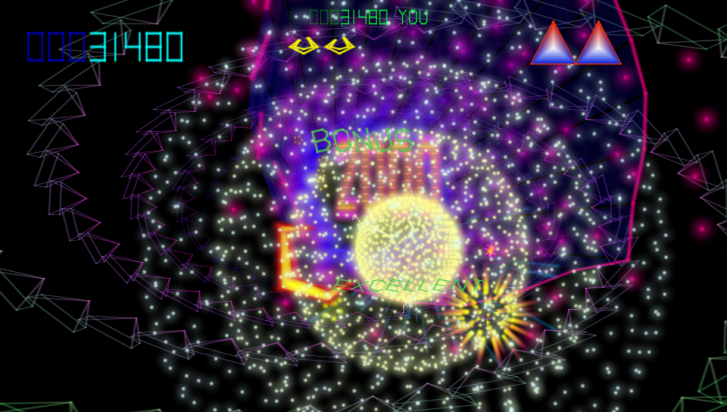 This detonation detonotes the ending of the level, and shortly after you will get to see the entire surface tearing itself apart into a zillion bits… 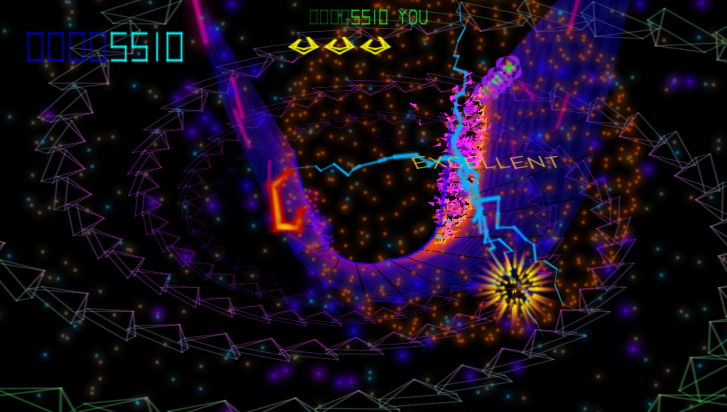 ..which all kind of stream and flow away in a big kind of swooshy cloud thingy as you pass through it on your way to the Transition Sequence.

The Transition Sequence is a bit like that bit of Star Raiders (if you’re playing it in proper manly mode) where you have to steer during your warp into hyperspace.  You have the opportunity to score some bonus points during the transition if you manage to steer your soul (which is the little sparkly thing in the middle of the screen, as any vicar will tell you) accurately centrally through the hexagonal warp-whatsits. 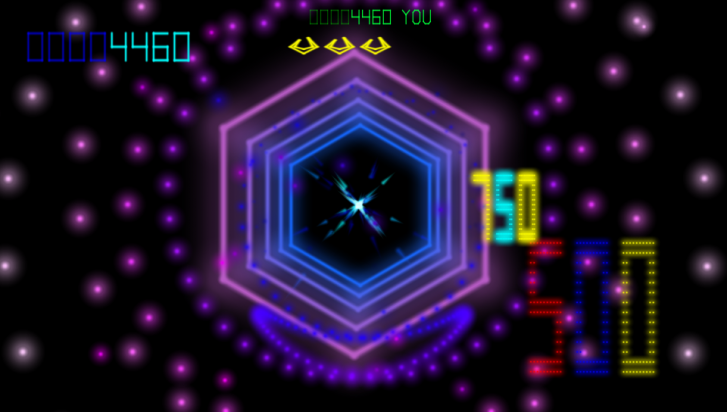 You steer by tilting the Vita a bit. You can’t not warp successfully if you don’t steer precisely, so it’s not something to worry about, it’s just a nice opportunity to pick up a few flying bonus points.  And if you fly super duper accurately you’ll get a Warp Heart and a few more bonus points, and you’ll get to hear an iconic TxK sound effect. 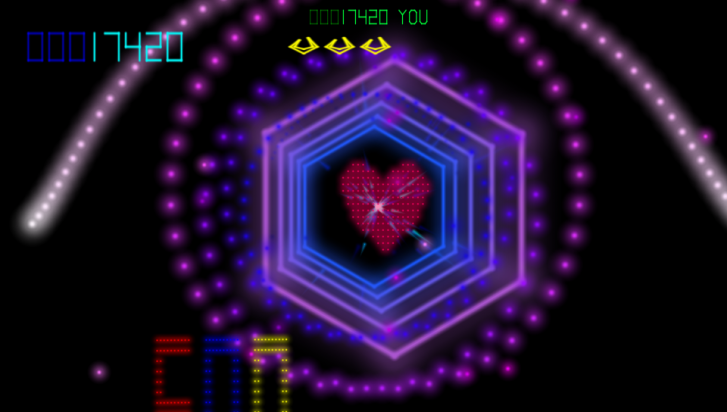 The transition sequence isn’t oppressively long, and very soon you’ll pop out of transition and descend to the next surface. 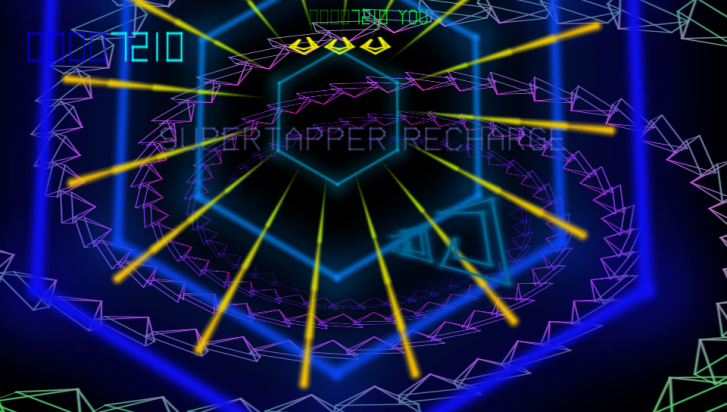 You’ll also see the cheery anouncement “Supertapper Recharge”.  ”What is a Supertapper?” you may well ask.  Well it’s one of these. 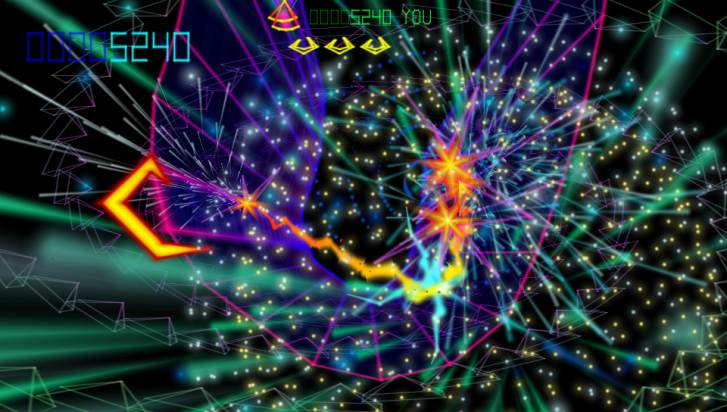 You can set one off per level by tapping the screen.  Tapping closer to any source of trouble will cause that source to receive electrical demise first.

Let’s have a look at that again, just because it’s pretty. 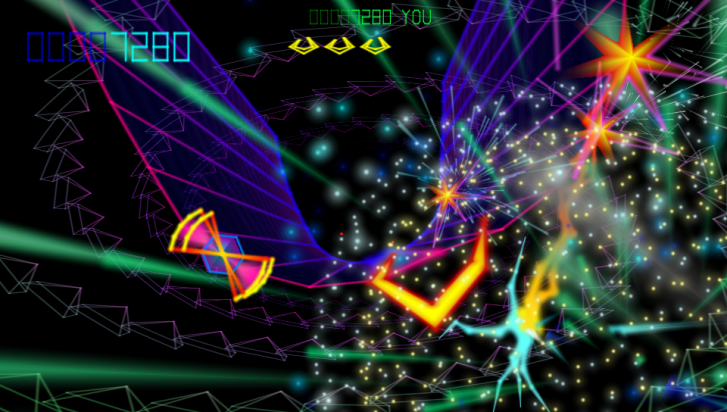 As I mentioned earlier at the moment there aren’t that many enemies in, just your basic flippers and these little shooty fellas: 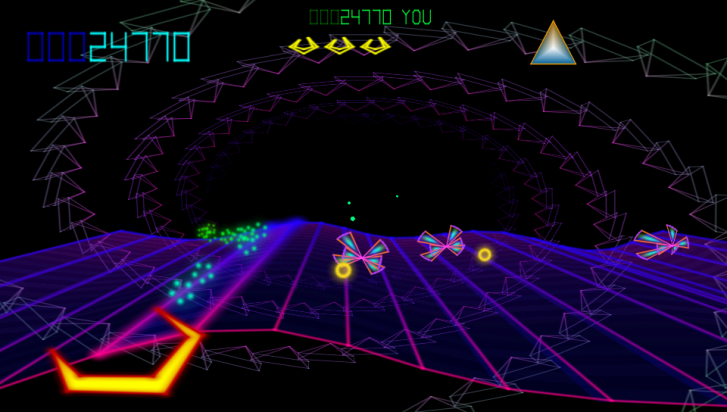 but with a lot more framework in place now it’s simple (and more meaningful) to add many more enemy types as we fill out the rest of the game.

Other items in the powerup chain include the good old straightforward bonus points: 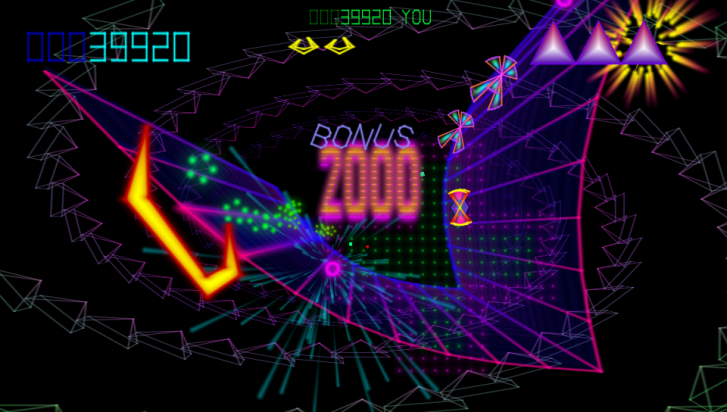 and of course our good friend Jump Enabled, which allows you to leap above the rim of the surface in order to avoid nastiness below and rain down Particle Laser shots on the hapless geometric entities below. 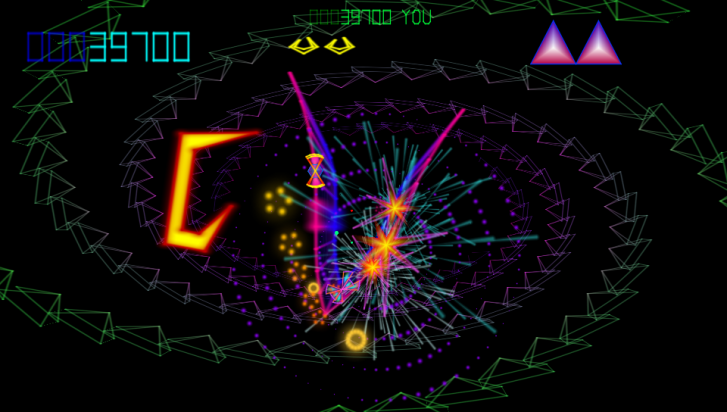 There are still a couple of places in the powerup chain that are marked with placeholders.  I will add further goodness in there since I don’t think anyone would actually strive for that which is described in the placeholder text. 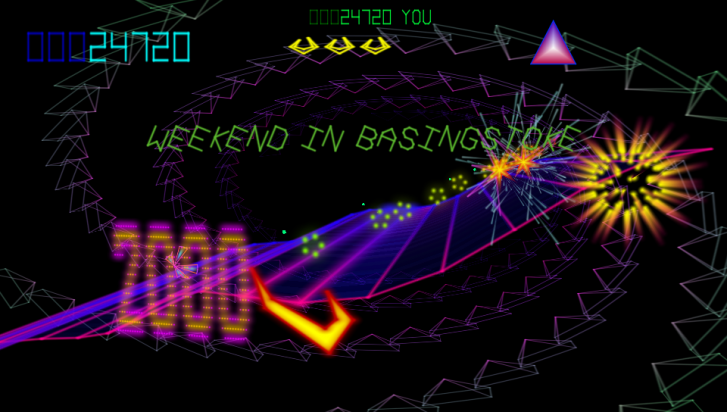 One nice thing I’ve put in that I really like is a kind of active Pause Mode.  You can pause the game but by tilting the Vita you can actually nose around and examine the paused moment in time from different angles.  It’s a small thing but actually kind of nice. 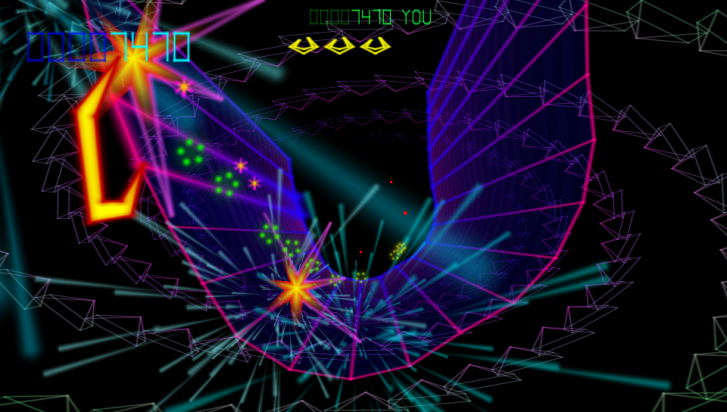 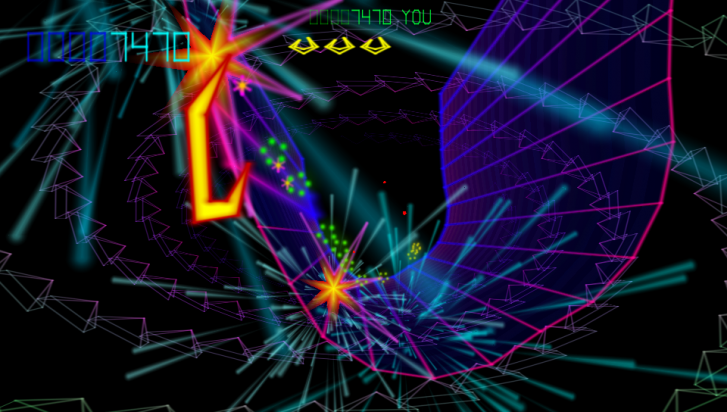 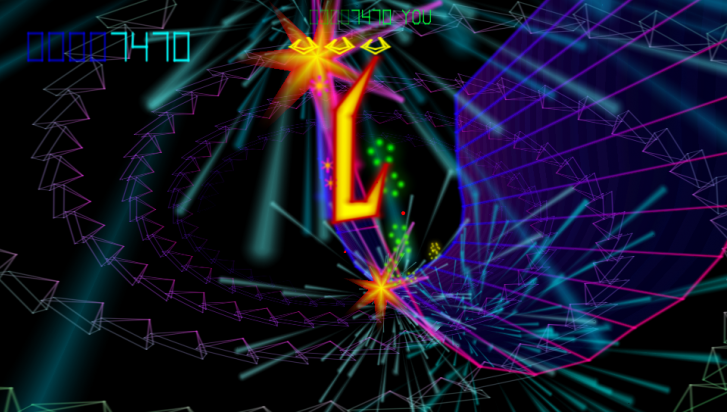 Should you gather up 4 Warp Keys during your play then you’ll start down the path of a different Transition Sequence: 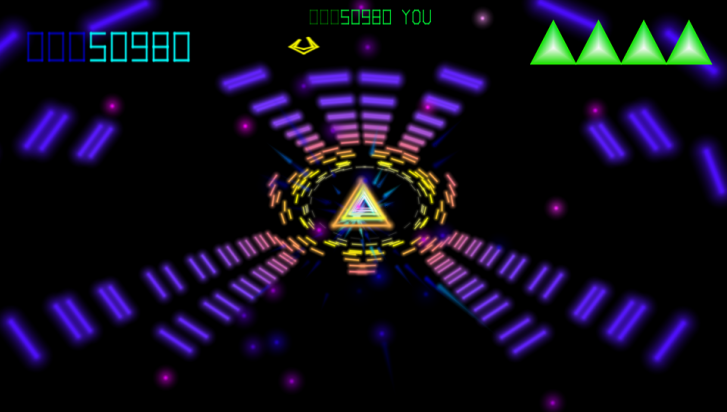 which is a bit like flying down the length of a gigantic neon Toblerone. Eventually you’ll emerge from the far end: 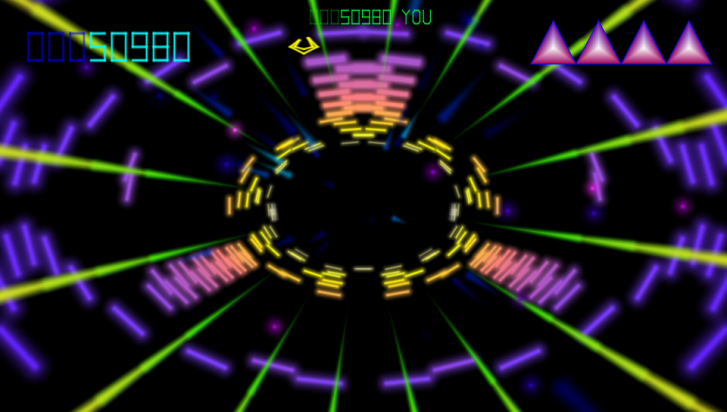 …and into the first Bonus Round, which I haven’t yet coded, so this is probably an ideal point at which to finish this blog.

Expect another when we reach alpha, which will contain aforementioned bonus rounds and a lot more game, and will likely occasion another jolly weekend in London which will be nice

This entry was posted in TxK Development. Bookmark the permalink.